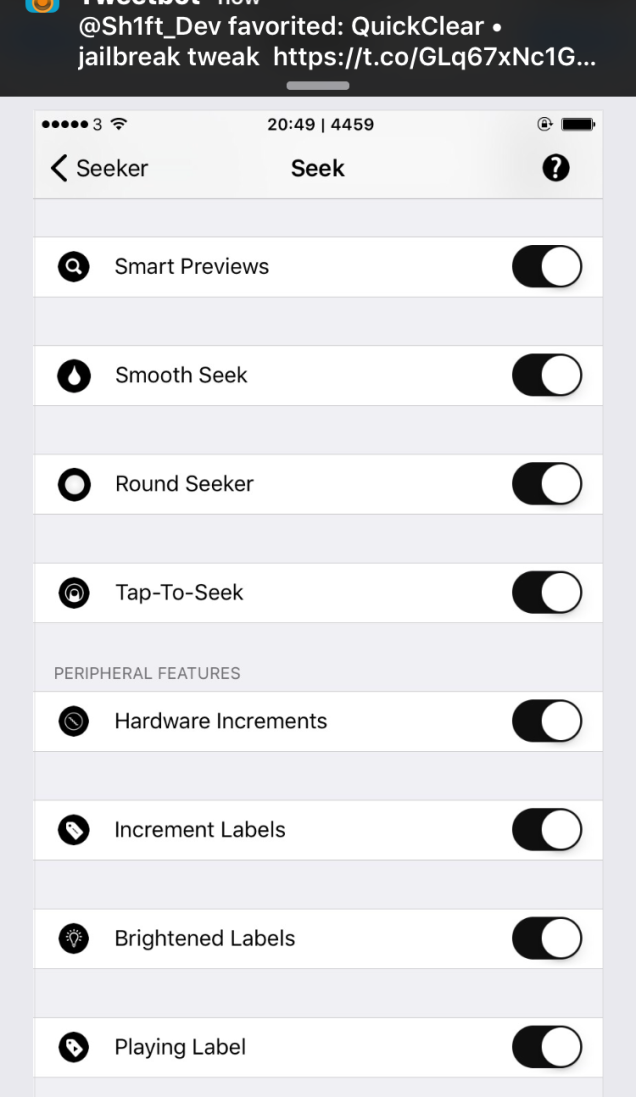 This tweak is for 2.99 in the BIGBOSS repo and is developed by Ron thakrar 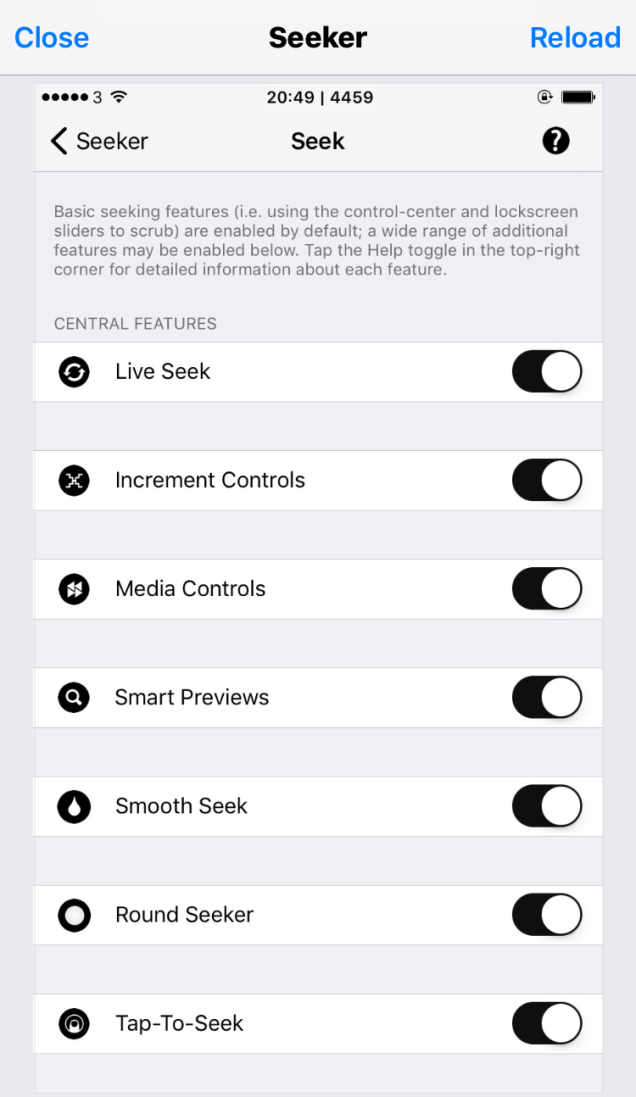 Compatible with iOS 8.4 – iOS 9 for iPhone, iPad and iPod. Works with several third-party apps including Google Play, SoundCloud, Spotify and many more. Also compatible with a range of popular Cydia Substrate extensions. Please read the listing at the end of the description for up-to-date compatibility information.
Seeker is a fully-featured extension of Apple’s native audio ‘scrubbing’ or ‘seeking’ implementation within the control-center and lockscreen and integrates seamlessly into iOS.
If you’ve ever missed a moment or simply just wanted to be able to scrub your music – now you can scrub away and never miss that moment again!
Seeker is highly customizable and offers the functionality described below. ** Tip: If you would prefer not to read detailed text, now might be a good time to skip to the screenshots, though I would suggest reading the text! **
Central Features
Seeking – The sliders in the control-center and lockscreen may now be used to alter track position (or in other words – to scrub audio), for apps other than Apple’s stock Music app.
Live Seek – Updates the scrubbed time concurrently with the movement of the slider. That is to say, if Live Seek is disabled, the time will only be scrubbed when the user finally lifts their finger from the slider – whereas if Live Seek is enabled, the user will hear regular audio previews while the slider is being moved.
Increment Controls – Seek forwards or backwards discretely in small time intervals by tapping on podcast-style controls on either side of the toggle playback button. These new buttons are provided in addition to the extant previous-track/next-track controls and do not replace them. The incremented time interval is determined algorithmically to match the type of audio playback involved – for instance, for a podcast or audiobook, one might expect an interval of 15 – 60+ seconds, whilst for a typical length music track one might expected an interval of between 3 – 7+ seconds. The computed time interval is displayed on the button itself for reference. Seeker’s increment controls will also stack with any existing podcast controls – e.g. for Apple’s Podcasts app, the user will now have 4 sets of podcast controls. The increment controls support colorization through substrate extensions such as ColorFlow and CustomCover.
Media Controls – Seek forwards or backwards continuously by pressing and holding the next-track/previous-track media control buttons respectively. The seeking algorithm is smart and the scrubbing rate will be adjusted according to the duration the controls are held (i.e. starting off slow and accelerating subsequently) and according to the type of audio being played. This option can often be used to scrub short time intervals with a precision that is greater than the standard Increment Controls option. The default blurred-audio style scrubbing for the stock Music app is unmodified; this option is available for all other supported apps. This option also integrates fully with the Live Seek option.
Smart Previews – When scrubbing using the media controls buttons with live seeking enabled, attempts to play the ‘live’ audio previews slightly ahead of the final scrubbed time; such that the previews the user hears will be closer to the location from which playback will resume when the media controls buttons are released. The intention here is to resume playback a short time interval prior to the last audio preview, such that the audio isn’t scrubbed too far ahead (this is what would normally happen otherwise).
Smooth Seek – Smoothens the operation of the slider by supplanting Apple’s ‘fine scrubbing’ implementation, i.e. enables high-speed scrubbing all of the time. This usually allows scrubbing with higher precision. This option also affects the slider within the Music application.
Round Seeker – Replaces the default slider bar with a round knob that is easier to grab and is more reminiscent of legacy iOS. The sizes of the volume and brightness slider thumbs in the control-center and lockscreen are also altered to match the new look. This option supports ColorFlow colorization.
Tap-To-Seek – Simply tap anywhere along the slider to scrub immediately to the tapped location.
Peripheral Features
Hardware Increments – Provides a system-wide hardware shortcut for the same incremental-scrubbing functionality provided by the Increment Controls option. Quickly double-tap the volume-up button to increment forwards and vice versa using the volume-down button. The choice of the volume button is intended as an accompaniment for users who are accustomed to Activator-driven track changing through short holds of the volume buttons, although this option does not actually require Activator to be installed.
Increment Labels – Offers another shortcut to the incremental-scrubbing type functionality by tapping on the elapsed-time and time-remaining labels on either sides of the seeking slider. This option is intended to provide compatibility support for any oddball third-party substrate extensions that don’t natively support full-sized increment control placement (though I can’t think of any off the top of my head). The user may also use this option in place of or alongside the normal Increment Controls option.
Brightened Labels – Increases the visibility of the media titles, playback times and volume controls on the lockscreen – by default, these can be difficult to read. Works for all apps. This option works particularly well with Spectral.
Playing Label – Simply appends the name of the playing application to the now playing titles view. Works for all apps.
Compatibility Information
The current release of Seeker supports the following apps. Seeker fully supports these apps unless otherwise specified.
Stock / Apple Apps
• Music and iTunes Radio

• Instacast
Experimental compatibility is also integrated for Safari at present (Video only).
Substrate Extensions
Seeker has been developed from the ground up to be fully compatible with several popular lockscreen and switcher customization extensions on the Cydia store – including but not limited to:
• Acapella 2

• Seng
If you are a substrate developer and wish to take advantage of Seeker’s capabilities or wish to make your product compatible with Seeker, feel free to message me directly.